The Report tab is replaced by a button(!), SUM is improved and the access to ABC Manuals is now much easier!

The Report tab is replaced by a new button

With the new version of Analyzer you can edit your reports, no matter which tab you’re on. If you want to edit a report, click the new button placed next to the cog wheel above your dataslicers (marked with a red circle at the image at the very top). You’ll get an overview of all saved reports – edit or delete them from here.

SUM: Click reports are enabled, and your settings are saved for later

New buttons makes it easy to compare different product groups, the click reports you create respond to your clicks: the column you click is automatically locked at the far left, and your settings are saved everytime! (if dealing with templates, you need to update them to save the SUM setup) Haven’t used SUM yet? Learn more about the new tab, introduced in december.

Several people have requested easy access to the ABC Manuals, used at the Introductory Course 1 and 2. As a result, we have implemented direct links from the help menu. The manuals are saved as pdf., and exist in both english and danish. 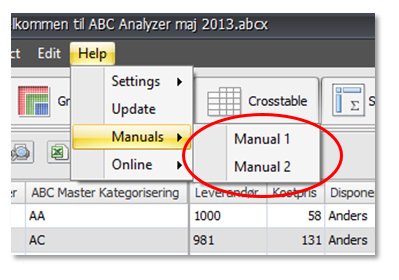